What is this Unhindered by Talent thing anyway?

"Unhindered by Talent" has been the title of my/our radio show since either 1989 or 1990, first on KTSB (now KVRX) in Austin, TX, and from 1991 on KUMM here in Morris, MN. In Austin and in the early days in Morris, the show was just me. At KUMM I had occassional show partners (Kristin Kaster Lamberty and Carol Ford), but was still mostly a solo affair until the late 90's when WeatherGirl and Sub-Evil Boy started joining me during summer broadcasting. After we came back from our year in Britain (2000-2001), however, we switched to all three of us year round.

In the grand tradition of artistic appropriation, however, I of course stole this excellent name from someone else. When I was in Britain the first half of 1989, one of the many bits of music I bought was an amusing, if not brilliant, album: Unhindered by talent by Sore Throat. It's a high speed blast of hardcore punk noise, with most of the songs running about a minute. I can't find any evidence that the band still exists, and their albums aren't terribly easy to come by, but searching on Google does suggest that you can get them if you try.

If "Writing about music is like dancing about architecture", describing our show is at least like skipping about tin shanties. Saying we'll play most anything (at least once) is true but unhelpful, and listing things we've played is like cataloguing trees for the forest. Frankly, Sub-Evil Boy's drawing of the three of us (see below) with our musical preferences says it as well as I could. (I definitely love the "Weird noise music" descriptor)

What you really ought to do is give our show a listen. During the school year (early September to early May) we're typically on from 4-6pm (U.S. Central Standard Time) on Sundays; our summer hours are a lot harder to predict, so check out our family news page for info on summer slots. If you're not within our 48 inch broadcast range and can't tune in to 89.7 FM (which is pretty much everyone), then you can listen on-line, with a 28K and a 56K feed.

In a perfect world we'd have our old playlists on-line and in some fancy searchable database, but such is not (currently) the case. We do, however, have most of our playlists back to 2002 on-line in a very crude text form. It would also be cool if we could archive our shows on-line, but the whole copyright thing makes that a bit tricky.

I could say a lot here about how important music is to me and why I care so much, but I think I'll leave that to other venues such as my weblog (as well as WeatherGirl's and Sub-Evil Boy's). Let's just say that it's a heck of a lot of fun. 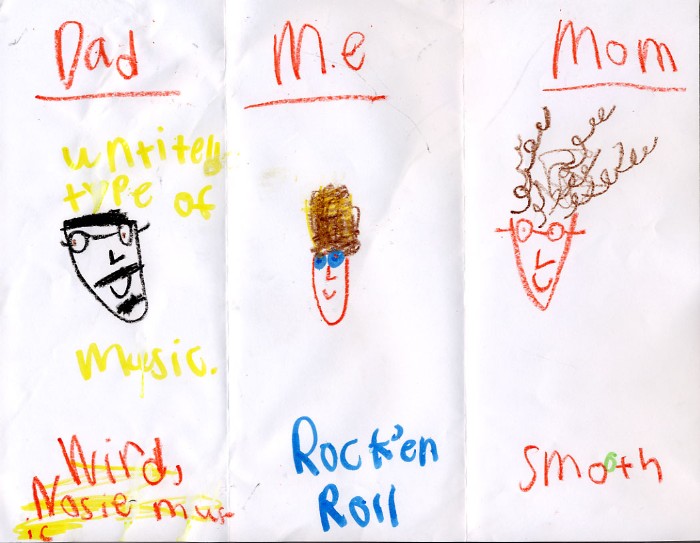 [Back to the main page]